Research Fables from the Sisters Grinn, No. 2 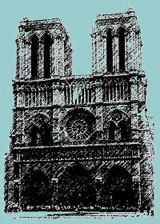 Once upon a time in the land of Evidence, a sickly baby was born. His parents loved him and nursed him back to health and named him Quasi-experiment. As he grew, Quasi-experiment was unable to keep up with the other children. His physical challenges made him unable to compete in games of Manipulate the Independent Variable, and his strength was insufficient for random assignment tasks. While his schoolmates Randomized Clinical Trial and True Experiment received glowing praise for their accomplishments, Quasi-experiment received only disdain. The land of Evidence valued rigorous tests of causality above all else and had no tolerance for other investigative approaches. Saddened and isolated, Quasi-experiment withdrew from the company of others and came to live in the remote towers of the great cathedral of Evidence, Notre Dame . 1

From his vantage point high above the town square, Quasi-experiment continued to watch the activities of his fellow citizens. He experienced regret and envy when Randomized Clinical Trial revealed that daily aspirin use reduces incidence of stroke among men and True Experiment discovered a way to reduce infections in intravenous lines. But mixed with his pain was also admiration and joy, for Quasi-experiment was also a seeker after truth.

Then, one day, Quasi-experiment's attention was drawn to a new presence in the town square, a young woman of great beauty and earnest purpose. She was named Esmeralda, and she proposed a new truth: Cigarette smoking causes lung cancer. At first, the citizens listened with interest, and many were noted to stop patronizing the tobacco shop. Fresh from other accomplishments, Randomized Clinical Trial and True Experiment first paid eager attention. Unable, however, to design a test of this proposition with their talents, they shook their heads and moved away. Smoking behavior over long periods of time was not amenable to investigator manipulation and could not be randomly assigned, at least not in human models.

As Esmeralda persisted in speaking her proposition, a gradual and evil shift came over the crowd. Strangers filtered into the square, murmuring, "There's no proof! Mere association does not demonstrate causality." Others whispered, "She seeks to violate our civil rights with her proposition, yet cannot present rigorous evidence to support her truth. This is the land of Evidence, not some kingdom ridden with witchcraft and superstition. Perhaps she is an evil being!" Swept away by these new arguments, the citizens were transformed into a howling mob and turned to attack Esmeralda. A stone was thrown, and then another. Esmeralda collapsed onto the ground.

No citizen noticed Quasi-experiment's urgent, awkward descent from his tower lair, but suddenly he was amongst them, standing between Esmeralda and the jeering, threatening crowd. Tenderly, he picked her up and with terrible countenance that brooked no opposition, carried her to safety in the parapets of the great cathedral. It was as though his action had broken a spell over the crowd. The citizens put down their rocks and sticks and looked at each other as though awakening from a dream. And each clearly heard Quasi-experiment's words:

"Good people, like you, I love the land of Evidence and always seek after the truth. You have shunned me, because I am not like Randomized Clinical Trial or True Experiment. But truly I say to you, there are propositions of importance -- like Esmeralda's -- that can never be tested by those methods. I cannot give you automatic control over extraneous variables through randomization or full ability to manipulate the independent variable. But I offer you a structured way of observing naturally occurring situations and comparing outcomes between non-randomized groups. I, for example, can ask tobacco users to stop smoking and compare the outcomes between those who are able to stop and those who cannot. Surely such a method better befits Evidence than no test at all. Cannot we all live together with some tolerance for ambiguity?"

The ensuing hush was broken by the sound of excited voices from the crowd. "I know a proposition of importance that I abandoned because I could not test it by experiment!" "So do I!" "And I, also!" Friendly hands reached out to Quasi-experiment as he and Esmeralda descended once more to the square. Sadly, Esmeralda did not stay with Quasi-experiment, but ran away with an epidemiologist. But from that day to this, there has been room in the land of Evidence for many tests of proof.

1 Not to be confused with the great cathedral of football of the same name. Back to the story...