Research Fables from the Sisters Grinn, No. 1 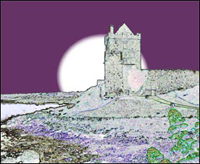 Once upon a time in the kingdom of Empiricism, there lived a gentle and good princess named Snow White. Since the death of her father, the wise king Imperial White, she had lived in the castle with her step-mother, Dingy Yellow, who claimed the throne . 1 Dingy Yellow was an exceedingly vain woman, who sought proof of her beauty from repeated measurements self-observations conducted by means of a talking mirror (reliability and validity unknown).

As Snow White grew into adulthood, she also grew in beauty. Inevitably, the day arrived when Dingy Yellow, upon consulting her mirror, was told that Snow White, and not she, was "fairest of them all."

Enraged, she banished Snow White from the castle. Snow White fled to the country, where she took up residence with a group of eccentric vertically challenged bachelor mine workers, for whom she kept house. Their names were History, Maturation, Testing, Instrumentation, Mortality, Selection Bias, and Reactivity.

The weapon of choice was an apple (variety unknown), which Dingy Yellow poisoned and placed with great stealth on a table in the mine workers' cottage. Pausing from her housekeeping labors, Snow White took one bite and fell into a deep sleep-like state. Returning from work, her friends found her, the offending apple still in her hand. Unable to rouse her and recognizing the evil magic of her state, they sadly and lovingly placed her in a protected place of honor. All who passed by could thus marvel at her great beauty and the sadness of her current state. And thus she slept as the seasons passed.

At length, among the passers-by, came Prince Intervention, of the kingdom of Trial and Error. He was immediately drawn to Snow White's beauty and felt the stirrings of true love in his heart 2 Impulsively, he asked the mine workers to remove the protective glass from Snow White's resting place, so that he could kiss her. They did and he did. And, to everyone's delight, Snow White coughed, spit out the apple bite, and immediately woke up.

"Or possibly", said Maturation, "the poison has weakened with time, and Snow White would have awakened without a kiss." Testing proposed that his own devotion had sensitized Snow White to love, so that she responded differently to Intervention than would any other beautiful princess step-daughter who found herself in the identical situation. Instrumentation suggested that Snow White's state had not really changed, but differences in measurement now led them to conclude erroneously that she was awake. Mortality claimed that Snow White's cells had likely mutated, so that only those unaffected by poison still remained to respond to Intervention's kiss. Selection Bias snorted and said he'd like to see the prince do the same trick with a princess who didn't like apples.

Reactivity was somewhat the outsider in the mine worker's close fellowship, having moved to Empiricism from Hawthorne, New Jersey. He had nothing to add to his colleague's list of potential extraneous variables that could account for Snow White's awakening. But he did wonder if somehow, Snow White had been aware of the special efforts to rouse her, and had reacted to that knowledge, rather than the specifics of the kiss. He questioned whether princesses who were not in clinical trials would respond the same way.

Now fully restored, Snow White recognized the unhappiness that the prince and her friends had created for each other with their conflicting explanations. She suggested a replication, but with a minor difference. She would wait until Prince Intervention was asleep, and then summon a kiss of true love to waken him. Eccentrics that they were, Snow White's friends did not agree this test would remove all their doubts, but they were willing for it to proceed. Prince Intervention, confident in his interpretation of events, was eager and ready. And so, that night, as Prince Intervention lay sleeping in Snow White's former place of honor, Snow White came to him and bent to give him a kiss of true love. And as soon as her lips touched his, he turned into a frog.

1 It was a community property kingdom and Imperial White hadn't bothered with a will. Back to the story...

2 Or possibly it was angina. Prince Intervention was big on intuition and spontaneity but not much for differential diagnosis and clinical reasoning. Back to the story...