Douglas Brooks set the tone at the start of the meeting.

At a White House symposium discussing HIV stigma, Brooks, then the director of the Office of National AIDS Policy and the president’s lead advisor on domestic HIV/AIDS issues, began by telling a roomful of researchers, policy makers, and community leaders about his own personal experiences. There were times, he said, that he felt judged, mistreated, and discriminated against in a health care setting, simply because he is living with HIV. 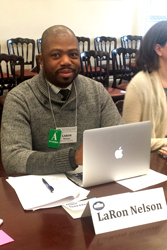 Regan Hoffman, an author, editor, and policy officer for the Joint United Nations Programme on HIV/AIDS (UNAIDS), did the same. So did Cornelius Baker, the chief policy officer of the President’s Emergency Plan for AIDS Relief (PEPFAR).

The message was clear.

“These are some of the most resilient, motivated people on earth, and their recent experiences with stigma nearly led them to disengage from the health care system,” said LaRon E. Nelson, PhD, RN, FNP, assistant professor of nursing and associate director of international research in the University of Rochester Center for AIDS Research (CFAR). “If their motivation can be undermined, what happens to the average person struggling to get by who doesn’t have the kind of influence they do? Do they check out completely?”

Figuring out ways to reduce HIV stigma and keep patients engaged with their care was the main focus of the conference, Translating Research to Action: Reducing HIV Stigma to Optimize HIV Outcomes, March 3-4 at the White House.

Over the course of the event, Nelson and other scientists and stakeholders in the fight against HIV/AIDS from around the world focused on best practices for measuring and monitoring HIV stigma, as well as methods of intervention aimed at reducing stigma in order to improve HIV outcomes.

“We heard from people on the front lines. We all know that HIV stigma is there, but this was an opportunity to learn about who is doing what and to strategize about how we can take what we know to inform anti-stigma efforts and reduce disparities in HIV/AIDS mortality around the world,” said Nelson.

As one of the featured speakers at the meeting, Nelson offered insights from his research on HIV and related stigmas with men who have sex with men (MSM) and also discussed findings from a promising three-city study focused on optimizing patient-provider interactions in order to encourage HIV-risk reduction. The study targeted care providers in Los Angeles, Chapel Hill, and Washington, D.C., training them on how best to support the autonomy of Black MSM patients, a group that currently has a one in two lifetime risk of becoming infected with HIV, according to the U.S. Centers for Disease Control and Prevention.

Nelson believes that stigma is a major factor contributing to the escalating HIV disparity in this group.

His client-centered care coordination model addresses stigmatization patients may feel in a clinical setting by allowing them to take more control in charting their plan of care—with the recommendations and support of the providers—instead of having provider-driven plan prescribed for them. After 12 months of the study, more than 90 percent of the men were still enrolled in the program, and approximately three out of four voluntarily decided to take Truvada as a daily preventative HIV medication.

“That’s unheard of,” Nelson said. “In recent years, there has been a lot of data presented indicating that Black MSM are not remaining engaged in HIV care. The default explanation is that the men don’t have good health care-seeking behavior patterns and lead lives that are very hectic and chaotic. We thought there had to be more to the story. Our assumption was that if a person comes to the clinic, it’s because they want care. So the question shouldn’t just be, ‘What is it about this person that they’re not coming back?’ We should also be asking, ‘What is it about the clinic environment that doesn’t keep people here?’ Maybe the men aren’t the problem. Maybe we’re an important part of the problem.

“A lot of stigma interventions focus on how we help a person deal with stigma—how do we help them build up the armor to go into a health care setting and advocate for what they want and be resilient. But people shouldn’t have to put on armor to go and get medical care. We didn’t try to make these guys tougher; we said we’ve got to make this environment softer.”

Nelson also moderated one of the four mini think tanks set up at the meeting to examine gaps and cultural differences in the measurement of stigma worldwide, as well as the design and evaluation of interventions to address stigma. He is hopeful that the symposium will result in more standard indicators for measuring stigma and additional funding for more multi-level intervention research.

“It was really, really exciting that people were hearing things and saying we should start working together,” he said. “Ideas started popping like popcorn. The NIH part of it is to create a mechanism to allow that to happen.

“People often say we can’t change the world. We can’t make the world stop being racist. We can’t eliminate stigma, but maybe we can prevent some of it. In some situations that represent small worlds, like a clinic, why can’t we stop stigma at the source? It’s not a simple task, but we need to try bold solutions if we’re serious about ending this epidemic.”

(Patrick Broadwater is a senior public relations associate in the School of Nursing and editor of NURSING magazine.)