By Patrick Broadwater
Wednesday, May 9, 2018 9:52 AM
Rankings/Awards, Faculty 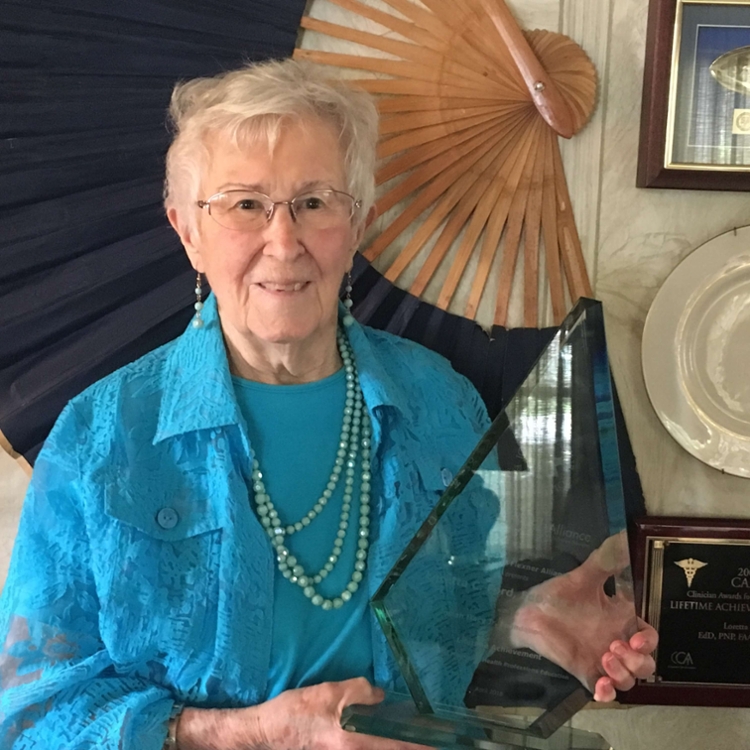 Loretta Ford, EdD, RN, PNP, FAAN, FAANP, the co-developer of the nurse practitioner model and founding dean at the University of Rochester School of Nursing, was honored last month with a pair of lifetime achievement awards recognizing her extraordinary impact on the profession of nursing.

Ford was honored with the Josiah Macy Jr. Foundation Lifetime Achievement Award for Excellence in Social Mission in Health Professions Education by the Milken Institute School of Public Health at George Washington University and the Beyond Flexner Alliance April 9 in Atlanta. She received the Lifetime Achievement Award from the Board of Directors of the National Organization of Nurse Practitioners Faculties (NONPF) at its annual conference in Indianapolis on April 21.

An internationally renowned nursing leader whose vision and habit of questioning the status quo galvanized colleagues and continues to inspire those who have followed in her footsteps, Ford’s studies on the expanded scope of practice in public health nursing led to the creation of the first nurse practitioner (NP) training program at the University of Colorado in 1965. Her work revolutionized the delivery of health services and the role of nursing in clinical care. Today, there are more than 350 academic institutions offering nurse practitioner programs and more than 200,000 practicing NPs.

Named a “Living Legend” by the American Academy of Nursing, she was inducted into the National Women’s Hall of Fame in 2011.