Author of Influential Textbooks and 'Conscience' of Student Nurses, Amy Karch Passes Away

Amy Karch, MS, RN, a beloved University of Rochester School of Nursing faculty member whose teaching career spanned five decades and helped spur the explosive national and international growth of the Accelerated Program for Non-Nurses died Jan. 16. She was 69.

When it came to preparing nursing students to become exemplary practitioners, Karch wrote the book – literally and figuratively.

An associate professor of clinical nursing, Karch not only taught and mentored thousands of nursing students in her 43-year career – including many who followed her example and now teach at the school – but she was also the sole author of two preeminent textbooks in nursing pharmacology used by countless professors, students, and practicing nurses across the country. 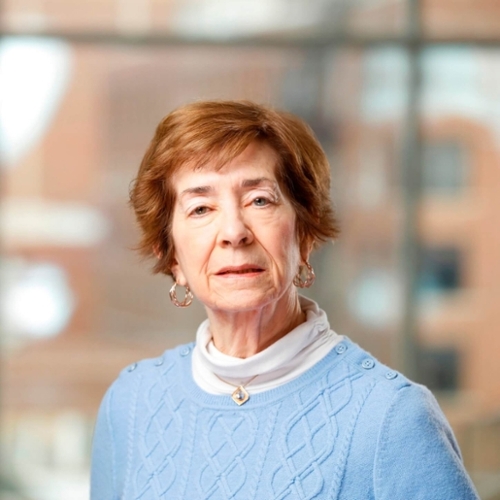 Karch developed her 1,024-page Focus on Nursing Pharmacology textbook (now in its 7th edition) based on her findings that students learn best when concepts, from simple to complex, are built upon one another so that they create a foundation of understanding. Organized by body systems, the heavily-illustrated book organizes essential nursing pharmacology information into focused, easy-to absorb steps.

Her Lippincott Nursing Drug Guide is a comprehensive, up-to-date drug guide for both nursing students and practicing nurses alike, and provides quick A-to-Z access to current, vital drug information. It is the only drug book that includes a “Do Not Crush” logo – a key patient safety feature – so that nurses can quickly identify medications that should not be crushed.

Karch’s painstaking development of these essential teaching tools, in addition to the hundreds of scholarly publications and presentations that highlighted her long career, placed her among the most respected experts in the country in nursing pharmacology. But Karch was also known as an exemplary teacher.

“Amy was a brilliant educator and an incredible colleague and friend. She was devoted to her students and worked tirelessly to help them be successful,” said Kathy Rideout, EdD, PPCNP-BC, FNAP, dean of the UR School of Nursing. “She has left a void in our school that will never be filled. We all loved her dearly!”

With a warm, energetic, and accessible demeanor and engaging, down-to-earth personality, Karch embraced teaching early in her career, believing this was the area she could make the most difference on the future of nursing and health care. And for more than 40 years, her students and colleagues – and the patients they have cared for – have reaped the benefits of her choice.

For years, Karch taught one of the school’s largest and most substantive (six credits) undergraduate courses, Pathophysiology/Pharmacology, and her presence helped the APNN program to skyrocket from 23 students at its beginning in 2002 to a highly competitive program that now admits nearly 200 students each year from all over the world. Knowing they will be taught by an instructor who authored the textbook of their most challenging subject was a tremendous draw for students. And once in her classroom, they repeatedly offered glowing evaluations of her teaching ability and style and looked to her as the quintessential model of providing patient-centered care. One year, students had wristbands printed up with the acronym WWAD – What Would Amy Do?

“She was the conscience of nurses going into practice,” said Patrick Hopkins, DNP, APRN, C-PNP, NNP, co-director of baccalaureate programs at the School of Nursing. “She reminded students that nursing was all about the human response. She always brought it back around to the patient. She changed the way ‘patho’ is taught. It had a context. It wasn’t just molecules moving around in the cell. It was what the patient is going to feel and how to deal with the effects of that.”

"Amy was a genius who knew how to explain complex concepts in ways that were easily understood. Her stories and clinical tidbits made the details easier and extremely enjoyable to learn,” said Rebecca Tucker, PhD, ACNPC, MEd, RN, assistant professor of clinical nursing. “Most importantly she facilitated students to want to strive to meet their potential and be the best nurse and/or nurse practitioner possible. I know I am one of many who would say that my life was forever enhanced due to her mentorship. I feel so extremely blessed to have been her student, co-worker, and friend."

She was twice awarded an NIH federal nurse traineeship and received the Nurse Scholar Award from the American Nurses’ Foundation.

A pet lover who was active in her community, Karch served on the board of directors of Rochester Hope for Pets and established Duncan’s Center for Veterinary Education, named after her beloved golden retriever, to support veterinary continuing education. She was a trustee for the Brighton Board of Education, a member of Oak Hill Country Club, and a local volunteer chairman for the PGA.

She earned her bachelor’s degree from the University of Rochester in 1971 and a master’s degree in cardiovascular nursing from St. Louis University in 1974. Karch returned to Rochester later that year, joining the University as an instructor in nursing. She held a succession of faculty appointments before being appointed associate professor of clinical nursing in 2006.

Survivors include four children: Timothy, Mark, Cortney, and Kathryn; and multiple grandchildren. She is predeceased by her husband, Fred.