When Elizabeth Sloand ’75N made her first medical missionary trip to Haiti in 1999, she thought it was a one-time shot to make an international contribution. Little did she suspect she would end up returning to the poverty stricken nation several times a year for the next two decades. 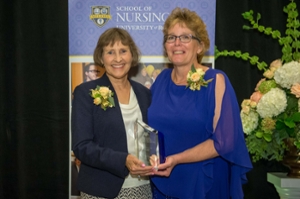 “I grabbed the opportunity and really enjoyed the whole experience,” said Sloand, an associate professor at Johns Hopkins School of Nursing. “It grew organically from me volunteering quietly on the side to become something I’ve done on a regular basis and has incorporated other students and faculty members.”

A pediatric nurse practitioner, Sloand has worked in Haiti as a clinician, nurse educator, and researcher. She has served as the east coast team leader at the Leon Medical Mission and led health promotion and educational activities at Haitian elementary schools. She even did her dissertation there, studying child health and survival in rural Haiti.

She was honored by the University of Rochester School of Nursing with the Humanitarian Award, presented to her at the 2018 Dean's Diamond Circle dinner.

Sloand's international work dovetails with her domestic experience, which has been dedicated to caring for underserved and low-income children. She teaches students interested in community health and focuses on the health and well-being of uninsured or underinsured children and youth in East Baltimore.

She was recognized for her commitment to others in 2017 with the Audrey Hepburn Award for Contributions to the Health and Welfare of Children from Sigma Theta Tau International, and she was selected as a fellow of the American Academy of Nurse Practitioners in 2018.

Sloand began her nursing career at Strong Memorial Hospital. She earned her master’s in nursing from the University of Maryland in 1986 and joined the Baltimore City Health Department, where she became involved in its school-based health center program. She was named director of the program in 1994 and joined the Johns Hopkins faculty in 1995, earning her PhD from the Johns Hopkins Bloomberg School of Public Health in 2007.