Patrick Hopkins, DNP, APRN, C-PNP, NNP-BC, whose soft-spoken and gentle manner belies his vehement passion for teaching and bringing out the best of his students, was honored by the University of Rochester with one of its top teaching prizes.

Last week, the University announced that Hopkins was chosen as the recipient of the Edward Peck Curtis Award for Excellence in Undergraduate Teaching. He is just the third nursing faculty member to receive the award in its 58-year history, and the first since Rita D’Aoust in 2002.

“I am honored. I don’t think that I deserve this – there are much better educators in the School of Nursing than I could ever be. I am grateful to the people who nominated me and wrote letters of support,” said Hopkins, who has taught at the University for more than 20 years and been a neonatal nurse at the UR Medical Center since 1994. “ I feel privileged and grateful for being provided the opportunity to teach, to interact with new members of our professions, to guide, to coach to success, to plant seeds, to nurture them, and watch them grow.” 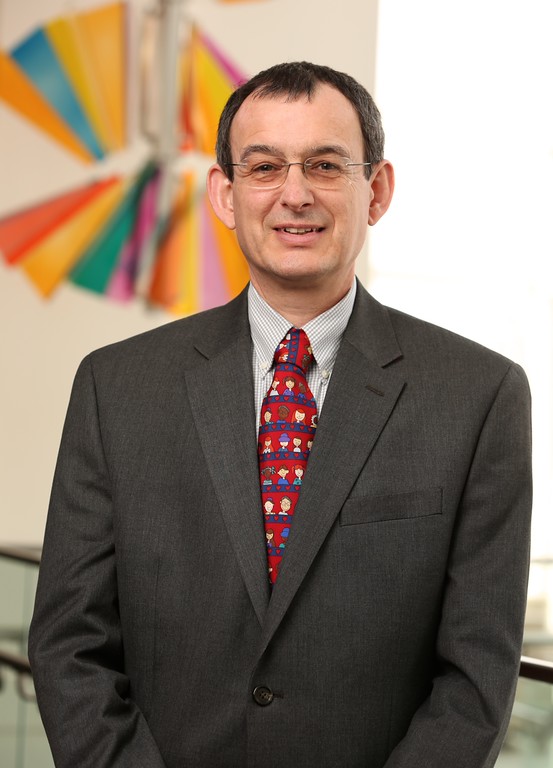 Awarded for teaching excellence in schools with undergraduate programs, the E.P. Curtis Award recognizes a record of distinguished teaching, typically developed over at least eight years, as well as a demonstrated readiness to help less experienced faculty colleagues or teaching assistants master their craft. The faculty recipient is honored with a citation at commencement and receives a monetary award. The Curtis Award debuted in 1962. In 1978, JoAnn Belle-Isle was the first nursing faculty member to receive the honor.

An assistant professor of clinical nursing, co-director of the Accelerated Bachelor’s Program for Non-Nurses and specialty director of the Neonatal Nurse Practitioner Program, Hopkins is known among students as much for his brilliant mind as his kind and friendly demeanor. He teaches pathophysiology in the accelerated bachelor’s program and content on the care of children and families in the pediatric nurse and family nurse practitioner programs. His students comment on his passion for teaching, his commitment to their success, and his creativity with methodologies, bringing his clinical experience into the classroom.

Hopkins spends an incredible number of hours with students outside of class working with those who are having difficulties to ensure their understanding of the content. It’s not unusual to walk through the School of Nursing’s atrium and see students crowded around him as he conducts an impromptu teaching session. He also maintains robust office hours; the door is almost always open and a steady supply of chocolate is on hand to welcome visitors.

“Patrick was definitely one of the most influential professors that I’ve ever had,” wrote one student in a course evaluation. “Never before have I had a professor that seems like they care about how I am both in and out of the classroom. He is so knowledgeable, and I hope that this isn't the last time I learn from him.”

“Patrick is the epitome of a student-centered educator dedicated to helping them achieve their goals,” said School of Nursing Dean Kathy Rideout, EdD, PPCNP-BC, FNAP. “His love for teaching and his students is certainly palpable, and vice versa.”

Hopkins has been recognized with the Dean’s Award for Excellence in Teaching, the Mary Dombeck Diversity Enhancement Faculty Award, and the Outstanding Scholarly Practitioner Award in the School of Nursing. A native of England, he has worked in the NICU at Strong Memorial Hospital since relocating to Rochester in 1994, rising from staff nurse to nurse leader to neonatal nurse practitioner.