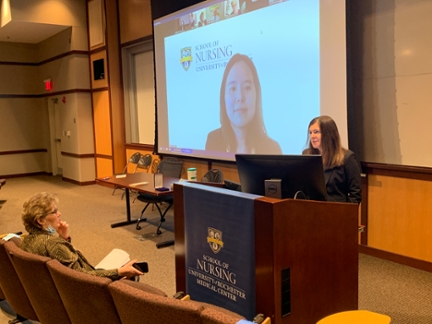 The installation of Kathi Heffner, PhD, and Vankee Lin, PhD, RN, as Wilson Professors was unlike any that had come before it.

For starters, this was the University of Rochester’s first virtual professorship installation ceremony. It took place Oct. 6 in a mostly empty Helen Wood Hall auditorium with a few dignitaries in attendance wearing masks, while the rest of the participants and viewers watched on Zoom. However, what made this event unique had nothing to do with the concessions made to a global pandemic, but with who was being honored.

Heffner and Lin were the first School of Nursing faculty members to be awarded the University of Rochester’s prestigious Marie C. Wilson and Joseph C. Wilson Professorship. They were also the first women recipients of the honor in its more than 50 years of existence.

“This is the first time in 53 years of the Wilson Professorship that it is being awarded to a women. In fact, two great women,” said Dean Kathy Rideout, EdD, PPCNP-BC, FNAP, during her introductions. “I’m especially pleased because 2020 is recognized by the World Health Organization as the Year of the Nurse and Midwife. It is also the 100th anniversary of the 19th Amendment. What a glorious time to have this incredible celebration.”

Heffner and Lin are frequent research collaborators and this past year were appointed co-directors of the Elaine Hubbard Center for Aging at the School of Nursing. Because of the synergy of their work and close working relationship, they will split the three-year professorship, with each carrying the title of Wilson Professor for 18 months. Lin is the current recipient. She took on the professorship in July 2020. Heffner will hold the title from January 2022 until July 2023.

Lin is a nationally recognized leader in research on cognitive aging and dementia among older adults. Her work is dedicated to understanding the underlying neurophysiological mechanisms of cognitive impairment and designing non-pharmaceutical interventions to target those mechanisms in order to mitigate or prevent decline in cognitive aging. A prolific investigator and publisher, she has been awarded more than a dozen awards, including the Council for Advancement of Nursing Science’s Brilliant New Investigator Award and the American Neuropsychiatric Association’s Young Investigator Award. She is also the director of the CogT Laboratory, which focuses on preventing cognitive decline and promotes successful cognitive aging.

Heffner’s research centers on how social, psychological, and behavioral factors promote or impair physiological stress adaptation and immune/inflammatory regulation. In particular, she is interested in the implications of stress for healthy aging; the influence of sleep on stress physiology and clinical symptoms, including chronic pain and trauma-related symptomatology; and the role of social relationships in stress and health links. Her work has been supported by multiple organizational, NIH and other federally funded grants. She is the associate chief of research for the Division of Geriatrics and Aging in the Department of Medicine, and also serves as co-director of the Rochester Roybal Center for Social Ties and Aging Research

The Marie Curran Wilson and Joseph Chamberlain Wilson Professorship Fund was established in 1961 and supports several endowed professorships in disciplines ranging from biology, economics, history, political science, medicine, and optical physics. The fund, directed by the University’s Board of Trustees, is named for Joe Wilson, ’31, founder of Xerox, and his wife, Marie “Peggy” Wilson, a former member of the Board.