A career in health care may have seemed inevitable, but Juliana Weiss forged her own path into nursing

Her parents knew health care would be a great career fit for her, but Juliana Weiss ’20N is the kind of person who had to come to that conclusion on her own. After several years of soul-searching and two degrees, she finally found the inspiration to pursue a career a nursing.

While she begrudgingly accepted that perhaps her parents were on the nose in their assessment, the path Weiss took to nursing was uniquely hers. But she can credit her mother in particular for helping to steer her to the UR School of Nursing.

Weiss and her parents were on vacation, sitting in the lobby of Mohonk Mountain House in New Paltz when her mother struck up a conversation with a stranger sitting nearby. The young woman was a nurse from Rochester. When Weiss’ mother mentioned that Juliana was looking at attending nursing school, the woman talked glowingly of the UR School of Nursing and its one-year accelerated program for non-nurses (APNN).

“She was saying what a wonderful program it was and it was only one year long, and that Strong was a great hospital right across the street. I had my computer with me to do my prereqs, so that night I pulled up the website and looked at the school, and I thought it was great,” said Weiss, a Hudson Valley native who had been accepted at New York University, but was hoping to find other options outside of the New York City metro area. “I figured, ‘I’ll apply, why not?’ Five months later, I was doing my phone interview.”

Ironically, the woman who suggested UR School of Nursing wasn’t even a graduate of the school. She had gone to Monroe Community College. “I forget her name, but my goodness, I would give her a hug if I could!” said Weiss. 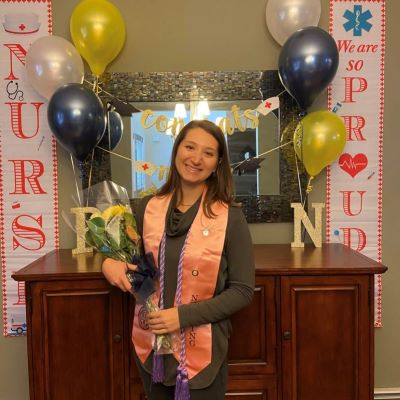 The decision turned out to be a fortuitous one for Weiss, who grew up around hospitals. Her father was a surgeon, and her mother was a physician’s assistant before transitioning to medical billing. Weiss was more into music and drama as a child, but her parents recognized that she had great ambition, a love for helping people, and a desire to dive into the middle of situations and find solutions. Those traits first led Weiss to an undergrad degree in sociology and a career working with nonprofits. Not satisfied that she was making a difference in people’s lives, Weiss went to get her master’s in nonprofit management at the University of Albany, where she landed an internship at a St. Jude Hospital field office before finding a job in a smaller regional hospital near her home.

“I’d be doing fundraisers and talking with doctors and nurses. Hearing their stories and listening to them talk about the medical team and what a difference they made in people’s lives, I realized, ‘That’s it! That’s the feeling I want,’” Weiss said. “I’m sitting behind this computer, but now I see what my parents said. I want my hands in it. I want the nitty gritty.”

Two months after earning her master’s, Weiss started taking prerequisite courses for nursing school. She arrived at the UR School of Nursing in January of 2020, completed half of her first semester of work and on her first day back from spring break was sent back home because of COVID.

Fortunately, Weiss and her classmates were back in clinicals by August and later had a 10-week clinical rotation, which reassured her that she had made the right choice. By October, she had applied and been accepted into critical care nurse residency program at Strong, an intensive six-month program preparing new graduates to be an ICU-level critical care nurse.

“The APNN program is all-consuming, in the best way. I think you have to approach it with the attitude that you chose it because it’s 11 months and 29 days and you have to love it for that reason,” said Weiss, who was one of two students chosen as class speaker at the December cohort’s virtual pinning ceremony. “It’s a roller coaster. But it's true what the faculty told us at the beginning of the program, 'The days are long, but the year is short.'”