Call it a clean sweep for the University of Rochester School of Nursing. All three nursing recipients of the Health Care Heroes awards presented by the Rochester Business Journal are graduates of UR Nursing programs.

The 2021 honorees in the Nurse category are:

A total of 41 winners across 14 categories were announced with winners being honored during a virtual celebration on May 11. Rochester Business Journal created the Health Care Heroes awards to recognize excellence, promote innovation, and honor the efforts of organizations and individuals making a significant impact on the quality of health care in the Rochester area. 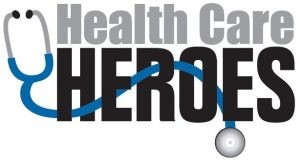 “Health Care Heroes are making a significant impact on the quality of health care in our area. When it comes to meeting the needs of their patients, there is no challenge too great or task too big,” said Suzanne Fischer-Huettner, group publisher of the Rochester Business Journal. “Often described as miracle workers, this year’s honorees really are heroes in our community.”

Alley has taken on increasing leadership responsibilities for Rochester Regional over the past eight years. She joined the system in 2012 as a nurse manager and practice administrator for the Rochester General Medical Group. She was named director of quality in 2015, and in 2018 became chief nursing officer. She previously worked for eight years as an RN and nurse manager at the University of Rochester Medical Center. She earned a bachelor’s degree in nursing from Nazareth College in 2005 and received a master’s from UR Nursing’s Leadership in Health Care Systems program in 2011.

Hiltunen leads the public health nursing services division, which aims to protect and promote the health of Monroe County residents though support, education, empowerment and direct nursing care services. In that position, Hiltunen played a key role in Monroe County’s COVID-19 response, leading the county health department’s isolation and quarantine group. In addition, she continued to serve as a clinical instructor at the School of Nursing, a role she has held since 2010. She earned her bachelor’s degree in nursing from the school in 1978 and in 1991 received an MBA from the Simon School.

In more than a quarter-century of work at Strong, Valcin has developed into one of the region’s most respected nurse leaders. She currently leads a team of nurse managers from eight intensive care units and nearly 550 staff members. She is also the president of the Finger Lakes Organization of Nurse Executive and Leaders, and was honored with a 2017 Circle of Excellence Award from the American Association of Critical Care Nurses. During the COVID-19 crisis, Valcin was among the URMC response team that helped to make crucial decisions regarding visitation and nurse staffing. She was also co-chair of the Highly Infectious Disease Unit (HIDU) steering committee and helped implement sweeping changes in staffing, such as floating nurses to different units on a temporary basis to help handle the outsized number of severe COVID cases. For her work during the crisis, she was nominated for the American Academy of Nursing’s COVID-19 Courage Award. Prior to taking on her leadership role in 2015, Valcin served as a nurse manager, and then senior nurse manager, for a medical intensive care unit. She has also served as a clinical nurse specialist and staff nurse on an MICU. She began her career in 1997 as a staff nurse on a med-surg unit. Valcin earned her bachelor r’s degree in nursing from Roberts Wesleyan College in 1996 and a master’s in nursing (with a concentration in education) from Duke University in 2007. She earned a clinical nurse leader post-master’s certificate from the University of Rochester School of Nursing in 2018 and a doctor of nursing practice (DNP) degree in 2020.