UR School of Nursing Ranks Among Nation's Best, According to U.S. News & World Report 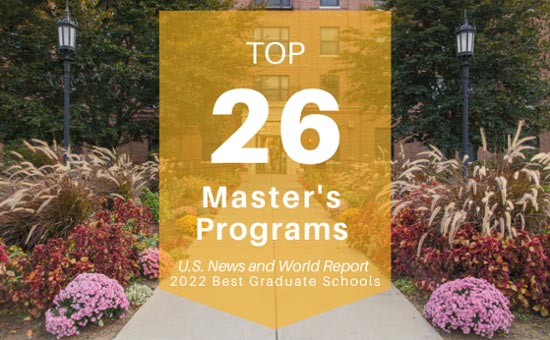 For the second straight year, the University of Rochester School of Nursing ranks 26th among the nation’s best master’s nursing programs, according to the 2022 Best Graduate Schools guide produced by U.S. News and World Report.

The UR School of Nursing ranked tied for 12th among adult gerontology primary care nurse practitioner programs in the issue’s rankings of individual master’s specialties. UR Nursing also tied for 44th among Doctor of Nursing Practice (DNP) programs, making it the only school in Upstate New York to rank among the top 50 for both its master’s and doctoral programs.

“Without a doubt, the past year was one of the most difficult anyone could ever imagine for a multitude of reasons, not the least of which was how it impacted how we educate our future health care providers, leaders, and scientists of tomorrow. But I am exceedingly proud of how our faculty and staff was able to pivot and continue to deliver high-quality instruction and support to all of our students despite unforeseen challenges presented by the pandemic,” said Kathy Rideout, EdD, PPCNP-BC, FNAP, dean of the UR School of Nursing. “These rankings just affirm the innovative and thoughtful approach the school takes to nursing education, research, and practice.”

The U.S. News rankings are conducted annually, and each school’s overall score is based on indicators in categories such as: student selectivity and program size, faculty resources, and research activity. The largest factor in the ranking is a quality assessment ranking provided by nursing school deans and health care professionals.

Additional information on the nursing program rankings can be found at www.usnews.com.