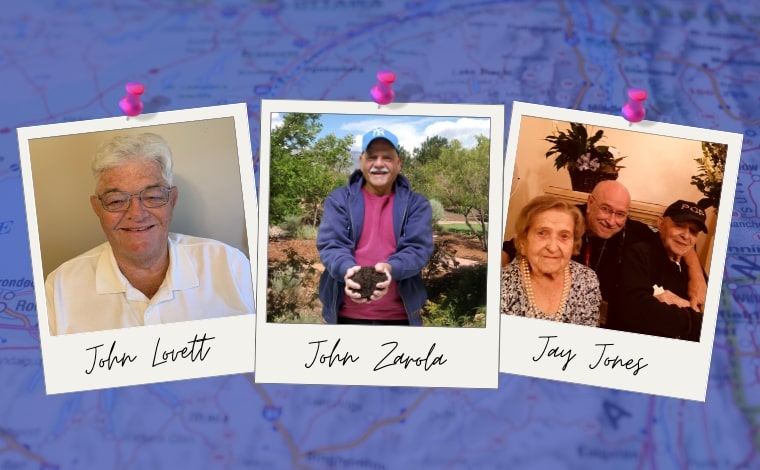 The year was 1966. John Lovett arrived in Rochester from Key West, Florida. At the airport, he asked a cab driver to take him to his new home: Helen Wood Hall at the University of Rochester School of Nursing. The cab driver thought he must be mistaken. Wasn’t nursing school for women? So, when he dropped John off, he followed him into the building — just in case John was confused. The receptionist at the desk assured the cab driver that John was in the right place. He was going to be one of the first males to graduate from the school along with John Zarola and James “Jay” Jones.

John Lovett – The First to Arrive

John Lovett, LCDR, NC, USN (Retired), BSN, CNOR, was already a naval hospital corpsman, an equivalent of an army medic, and had been involved in patient care in a naval hospital.

“I enlisted in the Navy, but I wanted to get a commission as an officer,” he said. “The Navy offered that incentive to corpsmen who graduated from nursing school, so I jumped at the chance.”

The Navy paid his tuition plus salary as second-class hospital corpsman. He was attached to naval ROTC at the University of Rochester River campus for administrative purposes, but he was acting like a civilian for the two years he was in school.

Lovett is now 82 years old and looks back on his days at the school remembering those who helped him on his journey.

“I arrived in the summer before the semester started because I had to take a few pre-requisites,” he said. “So, I was pretty much alone in my part of the dormitory. The receptionists Mrs. Button and Barb Kennedy adopted me and even called a chair at the front desk John’s chair.”

The male students were housed on the fourth floor of the building in the on-call wing where residents and physicians often stayed.

“The elevator was on the women’s side of the building,” he said. “So, I did a lot of walking!”
Lovett was born in Mississippi and raised in Arkansas. “Rochester weather was a shock to me,” he said. But he soon embraced the weather and even went tobogganing at Durand Eastman Park with his classmates.

“When we weren’t studying or caring for patients we had a lot of fun,” he said. “We would ride around to places like Letchworth in my ’67 Mustang convertible, have pumpkin carving contests, and rewrite words to popular songs spoofing our professors and doctors and put on shows for them.” In down time students went to the Bungalow, a bar on Mt. Hope, to sit and chat. “The med students would wonder why I had so many women following me,” said Lovett.

In the fall, Lovett was joined in the class by Zarola and Jones who also attended the school in Navy programs.

“Rochester was good to me,” said Lovett. “I am grateful to the Navy for selecting me to go to UR school of nursing.” Lovett even proposed to his wife of 54 years on the first floor of Helen Wood Hall where she had to stay when she visited him. He can only recall one hitch to being a male nursing student.

“My OB instructor said she didn’t know how to evaluate me,” he said. “She told me I did not have a ‘mothering’ instinct,” he recalls with a laugh.

After graduation, the Navy sent him to officer indoctrination school. He took his boards in Rhode Island and became an officer in the Navy. His career took him to Pensacola, Guam, Memphis, Taipei, Taiwan and Long Beach, California, and Okinawa. “I worked in pediatrics, med surg, ortho, and more,” said Lovett. “At one point in Memphis I cared for military prisoners of war returning from Vietnam.”

After retiring from the Navy after 22 years, Lovett and his family settled in Memphis and he worked in home health nursing, adolescent behavioral psych and as a school nurse prior to his civilian retirement.

“I enjoyed caring for patients so I thought I would give nursing a try,” he said.

He completed two years of junior college and enrolled in a three-year program at Willard State Hospital for a semester where he accumulated more college credit. Then he was accepted at the University of Rochester School of Nursing, enrolled in the naval program and after graduation went on active duty in the Navy. His career took him to naval hospitals in Philadelphia, Long Beach, and Vietnam.

After serving six years in the Navy, he traveled to the Mayo Clinic to become certified as a nurse anesthetist, spent the rest of his career in that field, and eventually settled in northern New Mexico. He retired 12 years ago and currently teaches home composting.

“Nursing was a challenging field for me and most of my time was spent in rural community hospitals where I had a high level of responsibility,” he said. “But that kept me sharp, and I kept up with current trends in the nursing anesthesia field and had a wonderful career,” he said.

John has many fond memories of his time at the SON. “I can remember getting together in small groups watching television in the lounge or eating in the little kitchen at Helen Wood Hall talking about our futures,” he said. “As the first male nursing students we helped pave the way for those who followed us,” he said. “But it was really a natural process.”

James Edward “Jay” Jones, NC, USN (Retired), BSN, MSN, ANA, CAANP, took an unusual path to the School of Nursing but one with memories that he cherishes. Jones came from a family in rural Missouri and was born a few miles from the west bank of the Mississippi River. He always knew he wanted to be in health care and hoped to be a doctor, so he pursued pre-med at Southern Iowa and then enrolled in the University of Illinois.

“I quickly realized that I was going to run out of time and money,” he said. “I was working 15-20 hours a week at the student union to pay for college and having trouble keeping up with my classes.”

So in 1963, right after the assassination of President Kennedy, he dropped out of school without telling his family because he was ashamed. He took a train to Chicago to find a job and stayed at the local YMCA. It was only then that he wrote a letter to his family apologizing for what he thought would disappoint them.

He became a manager trainee at SS Kresge in Columbus during Christmas time. When his manager asked Jones to come to his office, the 20-year-old thought he was going to be fired. Instead, his family was waiting there for him to tell him they loved him and take him home.

This all happened during the time of the Vietnam War and when he was home for a few months Jones was notified by Selective Service that he would be drafted soon. Instead, he enrolled in the Navy and was stationed in the Great Lakes. While there he met a young woman on a train who wanted to share her birthday cake with him. The woman eventually became his wife, but not before fate took him to other Navy assignments and to the School of Nursing.

His first assignment was officer corps school at a naval hospital in Philadelphia. There he would meet another woman who would change his life, Miss Cornelius, an assistant director of nursing. She encouraged him to apply for the Navy program at the University of Rochester, the first year the Navy was opening the program to males.

“This was an exciting idea to me,” he said. “I knew I wanted to be in health care, and I knew I had the personality and the drive to be a nurse and be responsible for patient care.”

When he didn’t hear back about the program, he volunteered for another assignment. But when Miss Cornelius heard that news, she took his name off the new assignment list and insisted he keep trying for nursing school. A little while later he was accepted into the University of Rochester School of Nursing.
Jones’ journey as a nurse has taken him to Rhode Island, Pensacola, and to Guam where he cared for those with casualties from the war. He retired from the Navy at the age of 62 after 20 years, took a job with the Veteran’s Administration and continued working as nurse for the federal government for 26 years.

“My 79 years has had many mountaintop and valley experiences,” said Jones. “I consider my time in Rochester to be one of the peak experiences. I learned a lot about the emotional side of nursing there, as well as academics. It is so important that nurses care. It’s a trademark of our profession.”

Today Jones lives in Memphis on the east bank of the Mississippi and is still employed as a contract worker in the medical department of a local prison. If he should ever decide to retire he has the goal of writing an informal autobiography titled: “An Average American Citizen’s Life on the Mississippi: Borned on the West Bank, Dying on the East Bank.”

He considers himself the first male graduate of the University of Rochester School of Nursing. “That’s thanks to alphabetical order,” he said with a smile.

Want to share your news with us? Reach out to us through the Class Notes form.