To Stephen, a medical mission trip to one of the world’s poorest countries seemed like the next logical step in a career that began on Wall Street.

“A lot of what I learned at Rochester was focused on what you’re going to do with your education,” said Stephen, who graduated from the Accelerated Program for Non-Nurses in December 2014. “I thought, why not go to Haiti and serve the community there and get to teach other nursing students.

“I have this education. That’s what it’s all about – using it to change the world and help other people.”

Stephen, a registered nurse who works on a progressive care unit at University of California San Diego’s Thornton Hospital, had heard about the mission trip from a friend who participated two years earlier. He joined the LoveWorks team from Point Loma Nazarene University, which offers aid to challenging and remote portions of the world, and with a local nurse practitioner, served as co-leader of the expedition. The group departed in May after five months of training focused on cultural sensitivity and being well-prepared to meet the medical needs of the local community.

Once in Haiti, the group roomed on the upper floor of a four-room schoolhouse and held open houses 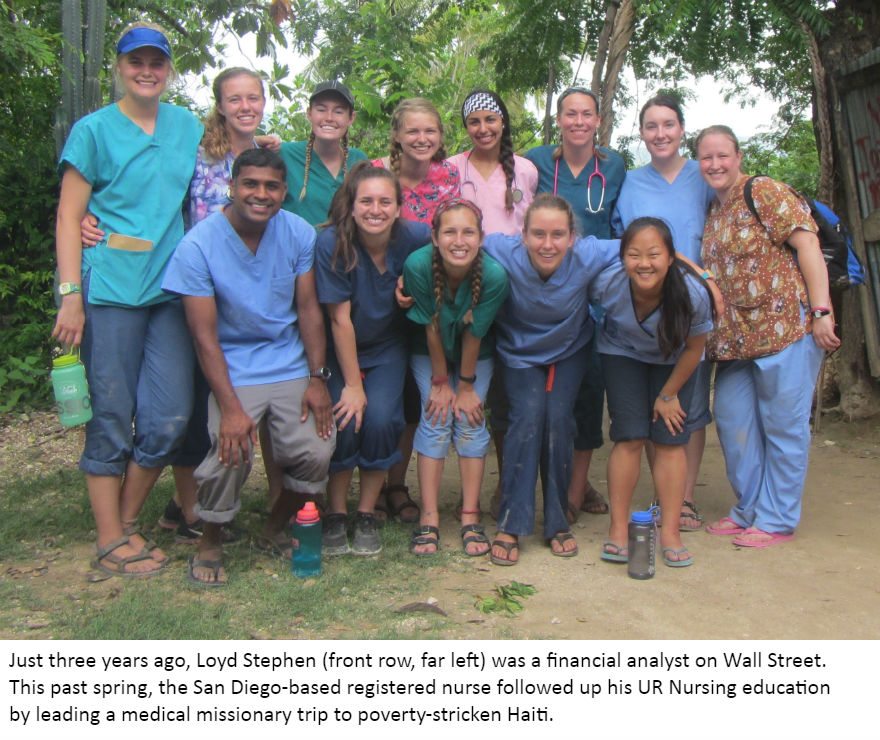 and set up free clinics in schools and churches for residents who don’t have access or can’t afford health care.

“When mission trips come it is a real blessing for the community,” said Stephen. “It’s an opportunity for them to get care they wouldn't normally get.”

For Stephen, serving as an instructor to a new generation of nursing students felt like an opportunity to repay others who helped him launch a new career. A business administration major at Northeastern University, he worked as a financial analyst in Manhattan for five years before enrolling at the UR School of Nursing.

He was in a recovery room after a tonsillectomy when he became fascinated by the nurses contributing to his care.

“I knew what they were doing for me, but I was also seeing their interactions with other patients and staff,” he said. “It was an a-ha moment, a calling. This is what I’m meant to do – be a bedside nurse and care for others.

“Best decision of my life so far.”

Soon after he was discharged, he shadowed nurses to get a feel for the job and enrolled in night classes in Queens to fulfill his prerequisite course requirements. He looked at schools all over the country before quitting his job and enrolling in the UR School of Nursing’s accelerated program.

“The reputation of the school appealed to me,” he said. “It was no contest when compared to others. The duration, the support of faculty and staff, the resources were all there. The clinical hours are more than the state requires. A program that exceeds expectations, that’s the program you want to be in.”

Traveling to Haiti to share his expertise was one way for Stephen to use his UR education. His next step is to build on that foundation. This summer he was accepted into the family nurse practitioner master’s program at Azusa Pacific University, a three-year part-time program.

“There’s little doubt that I’ll be able to handle it,” he said. “Going through the accelerated program was the hardest, most difficult, and intensive thing I’ve ever done. If I can be successful in that, I can do any other nursing program.”