Assessing fetal weight for the purposes of growth tracking and labor planning is a critical component of safe prenatal care. Estimates of fetal weight in the third trimester of pregnancy, typically gathered using ultrasound-derived measurements, is often inaccurate, sometimes off by up to 40 percent for newborns weighing 4000 grams (8.8 pounds) or more at birth. Women who are estimated to have newborns with a birthweight above the 90th percentile are more likely to be induced into labor and have cesarean surgery. 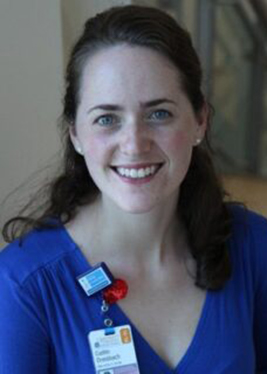 Data science tools such as convolutional neural networks (CNN), algorithms built to recognize patterns in imaging data, have been used successfully in fields such as radiology and cardiology to overcome challenges in measurement and assessment, but no studies to date have used CNNs to estimate fetal weight from real-world clinical data. The UR School of Nursing study, funded by the National Institute of Nursing Research, will focus on developing an image analysis algorithm to more accurately estimate fetal weight in the late third trimester of pregnancy.

“The central hypothesis of this study is that a CNN can outperform standard practice for the estimation of fetal weight,” said Caitlin Dreisbach, PhD, RN, assistant professor at the UR School of Nursing, who is the principal investigator on the three-year, $476,000 study. “A CNN algorithm has the potential to learn characteristics predictive of fetal weight without relying on traditional biometric measurements. By having more accurate estimates of fetal weight, we could avert the cascade of obstetric interventions, thereby decreasing inductions and reducing unnecessary primary cesarean surgery.”

Co-investigators on the study include Susan Groth, PhD, WHNP-BC, FAANP, associate professor at the UR School of Nursing; Loralei Thonburg, MD, James R. Woods Jr. Professor in Obstetrics and Gynecology at the University of Rochester Medical Center; Stefanie Hollenbach, MD, MS, assistant professor in the Department of Obstetrics and Gynecology at URMC; and Linwei Wang, PhD, professor in the Department of Computing and Information Sciences at Rochester Institute of Technology.