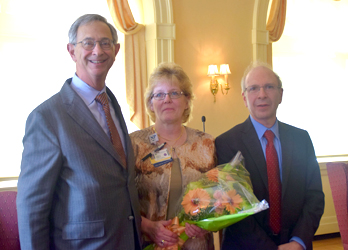 University of Rochester Medical Center CEO Mark Taubman, MD announced Tuesday that Kathy H. Rideout, EdD, PPCNP-BC, FNAP has been reappointed to a five-year term as dean of the School of Nursing.

Rideout, vice president of URMC and a professor of clinical nursing and pediatrics, has been a member of the UR Nursing faculty for the past 30 years. She was named dean in 2012 after a one-year stint as interim dean and seven years as associate dean for academic affairs. The University Board of Trustees approved her reappointment, effective July 1, during their meeting last week.

During her tenure as dean, Rideout has presided over a period of substantial growth in the three missions of the school: education, research, and practice. She has also been a champion for diversity issues – both on the faculty and student level – and has been an influential voice in national discussions on interprofessional education, nursing school leadership, and the future of nursing education.

“It was very clear that there was overwhelming support for Kathy’s reappointment,” said Taubman, who oversaw the decanal review process. “I don’t think I’ve ever seen such strong support for someone system-wide. It was a pretty easy decision.

“I am equally delighted with Mark’s reappointment of Kathy to be the dean of the School of Nursing,” said University of Rochester President and CEO Joel Seligman. “She has strengthened research programs, she has strengthened new initiatives, but what meant most to me in working with Kathy the last five years is her total trustworthiness. Kathy, you’re just a really nice person.”

“Kathy has done an outstanding job in her first term as the dean. It is widely held that the School of Nursing is a great place to work and study, and Kathy has been uniformly credited for having been responsible for creating this environment.”

One of her biggest successes has been the creation and expansion of the Center for Employee Wellness (CEW). Opened in 2013, the CEW partnered with the University of Rochester to provide employee wellness programming for all University employees. It has secured contracts to serve five other local employers over the past three years, providing the school with a significant revenue source and opportunities for continued growth.

On the education front, under Rideout’s leadership, the school has responded to an evolving health care environment by adopting curriculum changes to bolster nearly every one of its academic programs. The school also developed several new programs, such as the Master’s in Nursing Education and Care Manager Education. As a result, it was granted accreditation in 2013 from the Collegiate Commission on Nursing Education for 10 years, the longest accreditation period offered, and placed in the top 40 in the best graduate nursing programs and best Doctor of Nursing Practice programs, according to rankings by U.S. News & World Report.

The UR School of Nursing also ranks high in attracting federal research dollars. The school jumped 10 spaces to No. 25 among all nursing schools in 2015, with $1.6 million in funding received from the National Institutes of Health. Rideout has overseen an 18-month national search that recruited alumna Kim Arcoleo from Ohio State University to become the new associate dean for research and has bolstered the roster of faculty researchers with five new hires since 2012.

Earlier this year, Rideout was honored for her commitment to issues of diversity with a UR Presidential Diversity Award. Under her leadership, the Council on Diversity and Inclusiveness was redesigned to become the first elected council of faculty, staff, and student representatives with a designated budget. Rideout also played a key role in attracting Robert Wood Johnson New Careers in Nursing Scholarships to help attract underrepresented minority students. The School of Nursing was one of only five schools in the country to receive all seven years of the program’s funding, receiving more than $900,000 in scholarship money.

“I am very overwhelmed and also humbled by this opportunity,” said Rideout, who continues to serve as a pediatric advanced practice nurse at Golisano Children’s Hospital, caring for infants and children with ostomies. “I’m looking forward to serving the school for another five years.”

Rideout, a native of Pittsburgh, earned her bachelor’s degree in nursing from Indiana University of Pennsylvania and her master’s from the University of Pittsburgh in 1983. In 1986, she began work as an advanced pediatric nurse at Strong and joined the School of Nursing faculty, earning her doctorate from the Warner School of Education and Human Development in 1995. She completed her ostomy nurse specialty education program in 2000.

Rideout lives in Gates with her husband, Jeff, a pediatric social worker at Golisano Children’s Hospital.