For more than 90 years, the University of Rochester School of Nursing has been a pioneering force in the science and practice of nursing. Among our founders and faculty are giants of nursing education and research. As an institution, we are proud to have contributed significantly to the evolution and elevation of professional nursing over the past century, and look ahead to an exciting future.

The Unification Model directs nursing education, research, and practice. Unification is not only a philosophical approach but also an organizational structure that operationalizes the interdependence among education, research and practice. Education empowers nurses with knowledge, attitudes, and skills for leadership in professional practice and research. Research develops nursing knowledge to strengthen education and promote evidence-based practice. The practice of nursing is care delivery that promotes continued excellence through the generation of new research questions and the enrichment of the educational experience. The ongoing interaction of education, research, and practice benefits the consumer by ensuring quality nursing care.

From the beginning, the University of Rochester’s nursing programs were led by forward-thinking and ambitious educators. In 1925, Helen Wood, RN, AB, became the first superintendent of the School of Nursing, founded concurrently with Strong Memorial Hospital and the School of Medicine and Dentistry. Wood was a member of the influential Winslow-Goldmark committee that brought nursing training out of hospitals and into colleges and universities. At the time, Rochester was among only a handful of universities engaged in nursing education.

Wood was an early and passionate advocate for the integration of nursing education, clinical practice, and scientific research. She established the role of the director as a joint position overseeing the nursing school, nursing service at Strong Memorial Hospital, and all research activities.

In 1972, Loretta Ford, RN, EdD, became the inaugural dean of the newly independent School of Nursing. An accomplished clinician and researcher who helped pioneer the field of nurse practitioner, Ford not only raised the national profile of Rochester, but influenced the entire study and practice of nursing in America. She was inducted into the  National Women’s Hall of Fame in 2011.

The School of Nursing offered its first master’s degree in nursing education in 1951. In the following decades, Rochester’s graduate nursing faculty also played important roles in developing advanced clinical nursing specialties. Josephine Craytor, RN, MS, FAAN, is credited with pioneering the role of the nurse oncologist and developing master’s-level curriculum to educate UR nurses in this new field. Rochester was also an early leader in the nurse practitioner movement and developed the acute care nurse practitioner role within the Surgical Nursing Service at the UR Medical Center.

In 2002, the UR School of Nursing shifted from a traditional undergraduate program to instead offer accelerated programs for students with a non-nursing bachelor’s degree. And, in 2007, the school created the Doctor of Nursing Practice (DNP) Program to meet the changing demands of the nation’s complex health care environment.

Today, with an enrollment of more than 650 students across its academic programs, the school is focused on developing exceptional, team-oriented health care providers, researchers, educators, clinical leaders and innovators, who continually strive to improve health care provision.

The school’s high quality programs—offered across the continuum of learning, from baccalaureate through doctoral education—demonstrate its commitment to preparing a new generation of nurses to meet the growing needs of patients and families in an increasingly complex and diverse health care environment.

A Proud History. An Exciting Future. 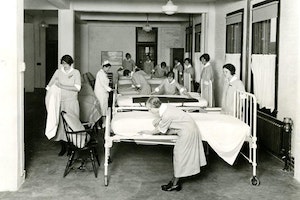 The first director of nursing, Helen Wood, helps the University become one of the first in the country to offer a nursing diploma program.

The Master of Science nursing degree program is created, laying the groundwork for the evolution of future clinical specialty programs. 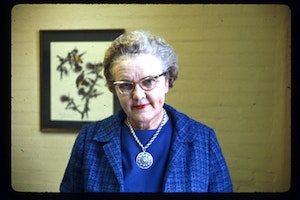 Eleanor Hall creates the Department of Nursing within the School of Medicine and Dentistry, a major step toward establishing an independent school.

The Pediatric Nurse Practitioner Program forms. Its graduates help to care for a growing number of children in the community, particularly the disadvantaged.

An independent School is established and Dr. Loretta C. Ford is named its first dean. She also pioneers the unification model by bringing together education, practice and research under one academic umbrella.

The Family Health Nurse Clinician Program begins as one of the only master’s programs in the country to prepare nurse practitioners in primary care. 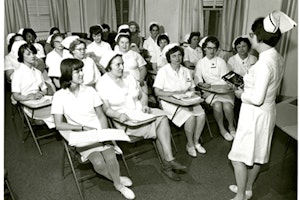 The PhD program— one of the first 15 in the country—admits its first students. Many others were patterned after Rochester’s highly focused and rigorous curriculum. 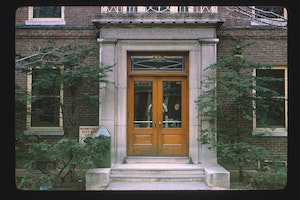 By the end of 1982, 51 nursing faculty had completed the primary care nurse practitioner program. These efforts to prepare faculty in primary care strengthened the teaching base and were influential in shaping the educational experiences of nursing students across the country.

Sheila Ryan, second dean of the independent School of Nursing, says, “The University of Rochester School of Nursing is acclaimed for a successful model of faculty and practice collaboration called unification, recognized for advancing innovative nursing practices.” 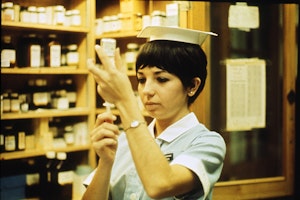 The School is first in the country to offer an Acute Care Nurse Practitioner program, after first developing the role in the late 1970s. Its graduates are now able to use the newly state-legislated title of “nurse practitioner.” 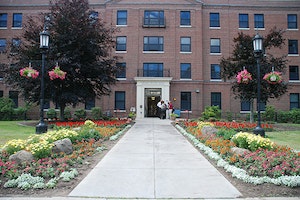 The School gains a reputation for producing first rate clinical researchers who were heavily recruited as faculty. 90 percent of the students who applied for federal funding received it.

A School-Based Health Center – staffed and supported by nurse practitioners from the School of Nursing— is established at East High School in 1995. Passport Health, a travel clinic which features travel immunizations and specialty vaccines, is also launched this year. 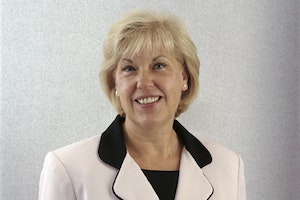 Pat Chiverton is named dean for the School of Nursing. 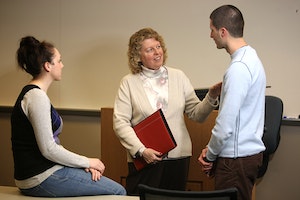 The Accelerated Bachelor’s and Master’s Programs for Non-Nurses accepts its first 22 students after the traditional bachelor’s program ends. Today there are nearly 200 students enrolled across three cohorts. 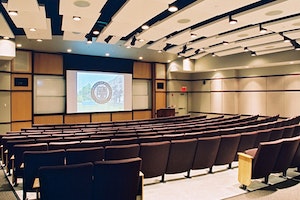 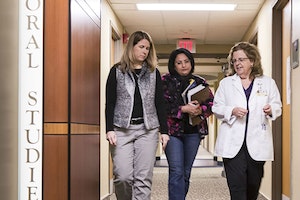 The first student enrolls in the Doctor of Nursing Practice (DNP) program, which enables advanced practice nurses to develop and lead improvements in health care delivery while remaining in clinical settings.

With support from the Robert Wood Johnson Foundation New Careers in Nursing program, the Center for Academic and Professional Success (CAPS) opens to provide support, coaching and mentoring to students. 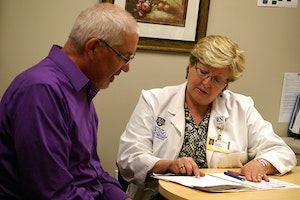 The School of Nursing is selected to provide comprehensive wellness services to University of Rochester employees. Today, the employee wellness program has expanded its reach to serve more than 32,000 individuals across seven counties in New York. 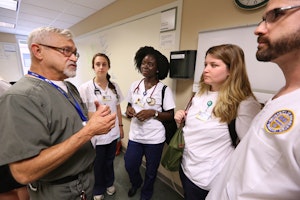 The School plays a key role in helping the Medical Center become the first in the country to establish an Institute for Innovative Education, which initiates new ways to educate nurses, physicians, and other health care professionals together as patient-centered teams. 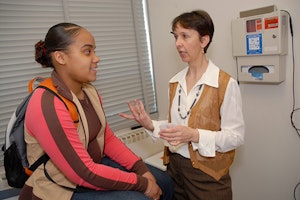 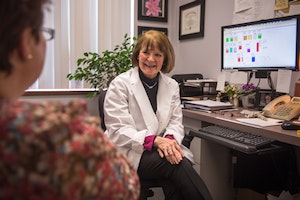 A new Master of Science in Nursing Education (MNE) program is created to address a shortage in nursing faculty. In the same year, the School of Nursing’s Center for Lifelong Learning unveils an online Care Manager Education Program, the first of its kind in the country. 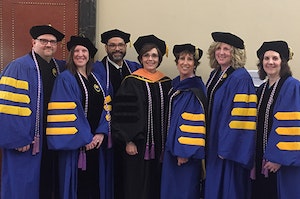 The School of Nursing landed at No. 11 among private institutions and 35th overall in the inaugural national ranking of Doctor of Nursing Practice programs compiled by U.S. News for Best Graduate Schools. 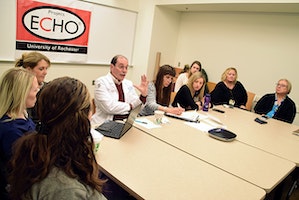 Directed out of the School of Nursing, the Western New York Comprehensive Care Center for Eating Disorders launched the world's first Project ECHO® tele-education hub specializing in the treatment of eating disorders. 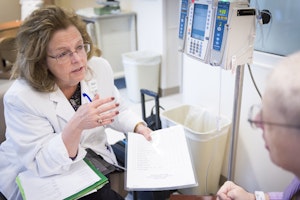 The University of Rochester ranks among the top 30 U.S. nursing schools in research funding received from the National Institutes of Health (NIH) for the eighth time in 10 years.

For the third year in a row, the School of Nursing received the Health Professions Higher Education Excellence in Diversity Award (HEED).
Schedule a Visit Support the School Join our Faculty