The Sarah and Ernest Taylor Memorial Nursing Award was established by Mr. and Mrs. Thomas J. Willis in memory of the parents of Mrs. Dorothy Taylor Willis. Mrs. Willis served as staff nurse in Nursing Service at Strong Memorial Hospital and as a faculty member of the University of Rochester School of Nursing from 1968 to 1977. The award is granted to a student completing graduate study in the Acute Care Nurse Practitioner Program in the School of Nursing as a source of encouragement to continue in a nursing career in an expanded role.  It was presented to a student who has shown clinical and theoretical excellence, compassion in patient care, and a commitment to the nursing profession.

The Louise Wilson Haller Memorial Prize is presented to the nurse completing the graduate program in nursing who exemplifies to the highest degree the spirit of nursing as shown by excellence in patient care and devotion to the best traditions of the profession.

The Elizabeth Clinger Young Award was established by the friends of Mrs. Young, a nurse, in memory of her and to honor her personal qualities of great compassion, courage, and concern for others that she maintained throughout a long illness. The award is granted to the student completing graduate study in a Primary Care Nurse Practitioner Program who most exemplifies those qualities of Mrs. Young that not only endeared her to others but also provided them with a model to follow.

The Leadership Faculty Award for Excellence in Leadership honors a graduate of the Leadership in Health Care Systems program who possesses superior ability and vision to create new patterns and partnerships for improving health care delivery and exceptional skills and generosity of spirit to inspire future leaders in health care.

The Dorothea Lynde Dix Prize was established by the Department of Psychiatry in 1950, when the first award was given. Dorothea Lynde Dix, a Massachusetts schoolteacher, began her work in prison reform at the age of 39. She devoted the rest of her life to improvement of prison conditions and proper treatment of the mentally ill. Through her dedicated efforts, millions of dollars were obtained to build psychiatric hospitals. This award is presented to a graduating baccalaureate student for high scholarship and outstanding skills demonstrated in the basic course of psychiatric nursing.

The Mary Reding Eckl Award was established by Dr. Donald W Frank, Dr. David B. Shuttleworth, and Dr. Edwin A. Sumpter in 1975. The annual award for a graduating baccalaureate nursing student honors Mrs. Mary Eckl their former office nurse and a 1934 graduate of the University of Rochester School of Nursing.

The IUatgery Fancher Da(V Memorial Prize was established in memory of Mrs. Daly, a member of the nursing class of 1948 who died in the early fall of 1983, by her husband, family, and friends. This award is presented to an outstanding graduating student who best exemplifies the life and character of Mrs. Daly, including compassion and competence in professional nursing practice, academic achievement, and commitment to a career in nursing.

The Registered Nurse Award was established by the School of Nursing faculty and is presented to a graduating registered nurse student who has integrated the philosophy of baccalaureate nursing education, achieved high academic standing, demonstrated outstanding ability to practice professional nursing, and shown evidence of strong leadership potential.

The Paul Burgett Nursing Student Life Award was established by the School of Nursing in honor of Paul Burgett, vice president and general secretary of the University of Rochester. This award is given to a graduating student who has enriched the School of Nursing environment regarding diversity, raised awareness of different cultural issues, actively participated in improving student life, has been a positive catalyst for change, and has the potential to influence nursing practice to be inclusive of all culture. Remembering Paul Burgett 1946-2018

The Student Nursing Association Recognition Award is presented to a graduating baccalaureate student, chosen by his or her peers, who has contributed with interest, concern, and enthusiasm to the quality of student life ill the School of Nursing in a variety of ways.

The Dean's Award for Excellence in Teaching is presented to the faculty member who demonstrates commitment to students, command of contributions to the subject matter of nursing, and outstanding performance in teaching, while fulfilling the role of an academician in a unification model. 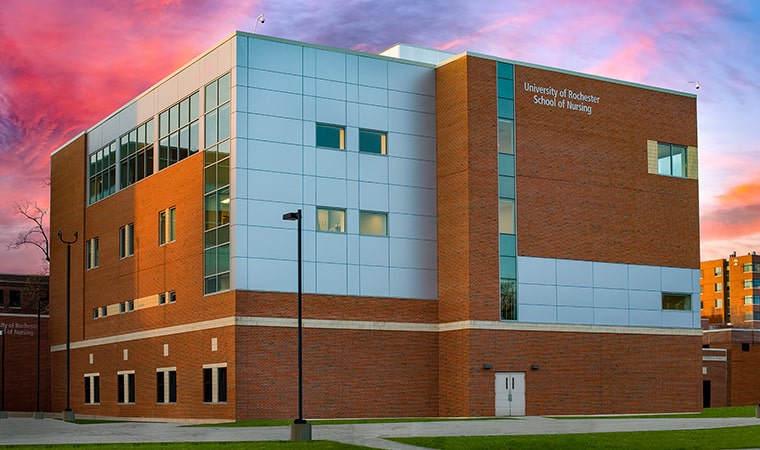